Back to School and The “Graduation” Navigation

So, now summer has past and Jack just started back to school. He had a decent summer and is now attending the “post-grad” program at his local high school.   The following post was written the day before he “graduated” and brings to light the fact that many young people with some measure of a disability are not able to receive a high school diploma due to circumstances beyond their control. I was all fired up about this huge issue at the beginning fo the summer, but time and more emergent challenges have pulled me away from the fierce frustration I feel when I think about all the loose ends left for Jack to navigate as he works to obtain the skills and knowledge he’ll need to move to counter the lack of an official high school diploma  and seek to reach his personal goals of a job, a car, and some measure of independence.

Disability employment continues to be a challenge for many and while there seem to be more and more forward-minded options available, there are often many pieces of this puzzle that have to be considered on behalf of the individual who is seeking such services. Pieces that are often not a part of most of the programs offered through various employment rehabilitation services such as Mass Rehab Commission and other disability hubs that offer tons of options but little thought given to the daily realities of families needing to utilize said services for their loved ones.  The main one I would like to mention is transportation.  Public transportation is scarce in rural and even suburban areas. Parents & caregivers and/or other family members are often unable to provide transportation consistently to either the place of employment or training program or to other social events designed for those with similar challenges. What seems like a minor issue can often become a major barrier.  So as Jack progresses in his “post-grad” program and is able to find some employment opportunities, I am hoping that we will be able to find creative workarounds to enable him to participate.

My son, Jack, 18 with moderate Tuberous Sclerosis Complex is “graduating” from Wachusett Regional High School this very evening. He’s getting a certificate of completion, NOT a high school diploma, which I signed on to for several reasons. Mostly because of TAND. What is TAND? It is land of confusion, is what it really is, but it stands for Tuberous Sclerosis Associated Neuropsychiatric Disorders and is basically the encompasses the entire umbrella of mental health diagnoses. 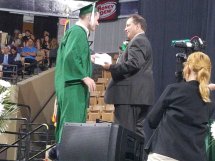 Jack receiving his Certificate of Completion

People that have TSC have a 90% chance of having some degree of TAND and not to digress, but it can be THEE most challenging aspect of a TSC diagnosis and often hits just when one has about had it up to the eyeballs with other aspects of TSC. So imagine as a parent, you’re trying to get a handle on your kid’s life-threatening seizures, stay on top of kidney manifestations, make sure you’re keeping up with the 55 or so prescriptions that need filled, refilled, negotiated, covered by insurance,  taken your kid for various pokings and proddings such as blood tests, MRI scans, neuropsychiatric evals, school IEP meetings to name a few….and then, just when you pause to catch your breath, your kid starts acting like a wild animal. Seriously. An uncaged wildebeest.  No one knew. There were whisperings and mutterings of “behaviors associated with TSC” and some writing on it, but not anything that was solid enough to catch the attention of professionals working with those impacted by these unbelievably intense behaviors.

This complete lack of understanding of TAND hijacked his entire educational experience up until about 3 years ago when things started to shift. We had to resort to dire measures including 3 psychiatric placements, locks on all our food and a lot of structure at home, routines, integration of mental health professionals, his medical team and his educational team to address his TAND related issues (aggression, rage, violent outbursts, anxiety, ADHD…probs more I can’t think of).  He is now able to manage his behavior without escalating to the point where we have to ride out the TAND wave of anger/frustration/grief/sorrow, 80% of the time. Which is huge, coming from a kid that was attacking me, threatening and terrorizing his siblings, his teachers, his therapists, and basically raising unbridled havoc for a long time period. It was painful to experience for all of us and that certainly includes Jack.

As “graduation day” has been approaching and I consider the implications of this choice, I feel the need to share a glimpse of Jack’s story.   I am offering a disclaimer at the start so those who might sense they need to brace themselves for a sob story or an angry rant, or a gut-wrenching tale of victimhood and persecution, you need not. The fact that this is happening is that there is no one to blame and doing so would only create further divisiveness and my goal in sharing this glimpse is to encourage connection and collaboration.

As I mentioned earlier, Jack was born with Tuberous Sclerosis Complex which is a condition that causes benign tumors to grow in different organs of the body.  Jack started having seizures very early on in life and has been on many different medications to control his seizures.  He’s also on many other medications to manage other aspects of his TSC, such as blood pressure medicine and one that controls the growth of tumors in his kidneys. Jack has had many hospitalizations, medical procedure, tests, and appointments and will need to manage the medical aspects of his disease for the rest of his life.  While he is medically stable, and the prognosis is good for a typical life span, that requires close monitoring, frequent communication with his doctors and the pharmacy and much more.

Jack had seizures that lasted over 2 hours.  Jack also had to change schools about 7 times during the course of his education within the WRSD to classrooms that were able to support the level of need his disability presented.  There were no adequate programs for Jack anywhere that we could find because his behavior was so challenging.

“Tuberous sclerosis complex (TSC) is associated with a wide range of cognitive, behavioral and psychiatric manifestations. These manifestations are often of greater concern to individuals with TSC and their families and caregivers than other symptoms of TSC such as epilepsy, skin lesions or kidney problems. TAND (TSC Associated Neuropsychiatric Disorders) is a new terminology to describe the interrelated functional and clinical manifestations of brain dysfunction in TSC, including aggressive behaviors, autism spectrum disorders, intellectual disabilities, psychiatric disorders, neuropsychological deficits, as well as school and occupational difficulties.”.

Jack also had problems managing his impulsivity in relation to food.  Because of his increasing weight and metabolic issues, his family went to desperate measures to limit his access to food that has included installing locks on fridge/freezer and pantry.

Jack has lost close to 100 lbs since we locked everything up.

Jack has finally started to read beyond a first-grade level.

Jack has overcome more in his short 18 years than most people will in a lifetime yet he is not earning a high school diploma.

So when he walks across that stage tonight, I will weep tears of joy and despair at the same time. Joy that he has made it this far and we did not have to institutionalize him.  He is a happy, overall well-adjusted kid with TSC. Despair because despite all this,  he reads at a third-grade level, he cannot fill out a job application, drive a car or manage his prescriptions or many medical and other appointments, communicate with social service providers, or interact with the team members of his hs “post grad” program. All that falls on me, well, not just me. Of course. It’s never just one person. There’s many, but on the frontlines, yes, it’s me. And mind you, I am not complaining, but I am tired.

There are many positives for Jack and I am confident he will make his way, with my help, my partner’s help, his father’s help, and the help of a significant number of other people in his life. There are incredible unknowns with TSC/TAND and Jack.  I’ve got decent relationships with the team at his program to continue to facilitate his trajectory in an upward trending fashion. So what is my problem? I guess it’s just this continual wake-up call to the reality of the fact that there are not a lot of long term solutions for our kids and I’m going to be helping him for a while yet. TAND gets complicated, is complicated and for us, it took almost everything we had to get to the point where we weren’t existing in some level of fear daily. Behaviors started early. Schools are not prepared to understand TAND but now we have documentation to validate and advocate. I do not live with regrets but take advantage of the tools we have available to us in the TSC community, the TS Alliance, various Facebook boards, etc, etc. My two cents. Happy Graduation Day Jack. You’ve done your best and you and everyone who knows you is exceptionally proud.

Mother of 5. Reigning in the chaos of life with my self expressive blogs. Passionate about a new awareness every day, tapping the divine within and without. Embracing life on a day-to-day basis and raising my children, 3 with TSC. I am an avid runner and use running, writing, dancing and meditation daily to cope with life. Right now, I am revitalizing my other website, writing a ton, witnessing the evolution of consciousness. Go Team Humanity!
View all posts by Jill Woodworth →
This entry was posted in tuberous sclerosis complex. Bookmark the permalink.